Christine was Poet Laureate of Tofino, Vancouver Island, Canada, for the 2020-2022 term.
Christine's prose and poetry have been published in The Goose, The Malahat Review, subTerrain, Poetry is Dead, Other Voices, The Fiddlehead, The New Quarterly, Room, and WordWorks. Her work appears in anthologies including Sweet Water: Poems for the Watersheds, Refugium: Poems for the Pacific, Rising Tides: Reflections for Climate Changing Times, Canadian Ginger, The Summer Book, and Locations of Grief: an Emotional Geography. Chris lived as writer-in-residence at Historic Joy Kogawa House in Vancouver BC, and won the inaugural Rainy Coast Arts Award for Significant Accomplishment from the Pacific Rim Arts Society in Tofino. Her essay "The Shaking Man" won first prize in the Federation of British Columbia Writers' Literary Writes, nonfiction category. She serves on the Selection Committee of Tofino's Poet Laureate Working Group. Check out her books below!

In Conversation with Christine Lowther: an interview. http://malahatreview.ca/interviews/lowther_interview.html 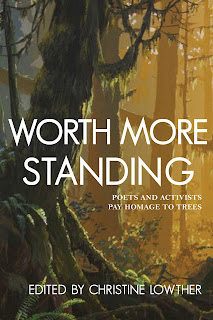 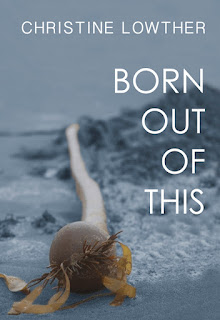 Born Out of This
Caitlin Press, Qualicum Beach, BC. 2014
cover photo by Vici Johnstone
Born Out of This made the BC Book Prizes Shortlist for the Roderick Haig-Brown Regional Prize.

This book is a mixture of autobiography, nature writing, humour, activism and punk. It "follows Christine Lowther’s journey from the unutterable loss of her mother to the discovery of her own poetic voice through deep reflection and her intimate connection to the coastal rainforest."  –49th Shelf's Most Anticipated Fall Non-Fiction Preview list.

Born Out of This is being taught at York University, Faculty of Environmental Studies, BES Program, ENVS 1800.06 Environmental Writing / Writing the Environment, by professor Cate Sandilands.

"Sylvia Plath-like," reviewed Brett Josef Grubisic for The Vancouver Sun. "Canadian rural-dweller Christine Lowther presents a quieter, localized, and deeply introspective persona over the 23 essays of Born Out of This. If a footprint, she’d strive to make the least destructive impression. Even when roving across Europe, the narrating voice feels inward, soft-spoken and finely attuned to the nuance of place."

Chris Fox, in The Malahat Review, says "when 'pure beauty wakes [her] in the morning,' I am reminded of Annie Dillard’s Pilgrim at Tinker Creek."  http://www.malahatreview.ca/reviews/190reviews_fox.html

“Passion, wonder, humour, courage, gratitude. These are words that come to mind when reading Christine Lowther’s spirited memoir, Born Out of This. While the trauma and grief Lowther has endured are inconceivable, her resilience and strength are very real. In these linked essays a remarkable writer takes her place, not in the shadow of, but alongside her mother, the late poet, Pat Lowther.”    –Patricia Young, author of Summertime Swamp Love

“A cool and colourful look at life, activism and punk, which is really all the same thing, isn’t it?”   –Joe Keithley of D.O.A.

“Born Out of This is a memoir of savageries and beauties written in a style that is reverent but never precious. Lowther is at home in the natural world — this landscape of disorder — in a way few people are. She lives and writes from the margins with the eye of a naturalist … Through it all, her mother’s spirit is her guide.”         –Eve Joseph, author of In the Slender Margin

“In Born Out of This Christine Lowther partners spirit of place with an exploration of self in a sensitive and celebratory dance of natural beauty and human creativity.”   –Candace Fertile, Room

"...Most poignant is this intergenerational and intertextual dialogue between daughter and mother, which characterizes these essays and Lowther’s own prolific body of work. Her mother-mentor remains a kind of spirit guide in her approach to life and their shared craft as Lowther matures into an identity of her own."   –Erin McMullan, The Goose

The extreme west coast is often characterized as the most "out there" edge of Canada and has become known internationally for artists residing in the region and giving it their own particular flavor. Living Artfully: Reflections from the Far West Coast offers unique perspectives and insights to the interrelationship of creativity and geography through intimate portrayals about the lives of artists. Writers, painters, carvers, and performers reflect on the private spaces of the arts - inner worlds and natural environments - and the public spaces for exhibiting, performing and sharing. Artists delve into their life journeys, the struggles and challenges as well as the joys and rewards of pursuing expression out here. Forty-two emerging and established artists have contributed to this collection, including award-winning First Nations playwright and poet Janet Rogers; painter, writer, and arts advocate Robert Amos; internationally noted artists Avis Rasmussen and Mark Hobson; renowned author Susan Musgrave; award-winning film maker Velcrow Ripper; and from the academy, dancer and educator Celeste Snowber, professor emeritus Bill Zuk and many more voices that shape what it means to live artfully on the far west coast.

"...fascinating, sometimes humorous, sometimes reflective, stories of how the creative process occurs not simply within the mind or on the palette but in place. One of the strengths of this collection is that by placing the various perspectives of diverse artists against each other, the heterogeneity of what “art” means and where it comes from is made clear. Tales of social and economic classism, heterosexism, and ageism add layers to the social geography of the coast, showing it to be just as complex as the physical topography of the far west." -Lauren Harding, BC Studies

"... shining poetry. ... This collection is a fine fusion of nature and human nature." - George Elliot Clarke

"For half the year, Christine Lowther lives on a floathouse in Clayoquot Sound. The other half, she lives on pavement or moves about, restless. Her poems come from the edges of polite society, of the ocean storm, where unexpected things happen, where changes occur; with a foot planted on each side she has become a keen observer, a wise voice." —Ursula Vaira, publisher.

"You have never read a more beautiful book of poems
about living in Clayoquot Sound."
—Josie Osborne, mayor of Tofino

"With scientific precision, Lowther describes the natural world that she knows well...through the origami-like magic of words...(Her) nature is such that she cares."
—Kasia Jaronczyk, Room